You are here: Home / Brewers / Brewers special season comes to an end

2011 was a special season for the Milwaukee Brewers, but it didn’t have a 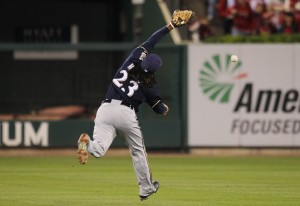 The Brewers lost the last two games of their National League Championship Series (NLCS) to the St. Louis Cardinals, including last night’s 12-6 setback in game 6, losing the best of 7 series 4 games to 2.

Brewers manager Ron Roenicke was adamant about starting right hander Shaun Marcum in game 6 on Sunday night.  Marcum made it through just one inning and put the Brewers behind 4-0 by the time he left.

The Brewers played behind in every game of the series and watched as the Cardinals scored 11 first inning runs.  In Marcum’s two starts in the series, he finished 0-2 with a 14.89 ERA.

If you thought Roenicke should have looked elsewhere for a starter in game 6, consider the fact that the other possibility was lefty Chris Narveson, who allowed four runs in the third inning and allowing the Cardinals jump out to a 9-4 lead.

The Cardinals entered the series red-hot and they stayed that way.  They hit .310 as a team and scored 43 runs.  In fact, St. Louis out-hit the Brewers and outscored them 43 to 26.

The Cardinals bullpen also did a number on the Brewers, posting a 1.88 earned run average over 28 2/3 innings.  They held the Brewers to a .155 batting average.

Corey Hart, Rickie Weeks and Jonathan Lucroy all homered in the loss for the Brewers.