You are here: Home / Brewers / Brewers win, guarantee a return to Milwaukee 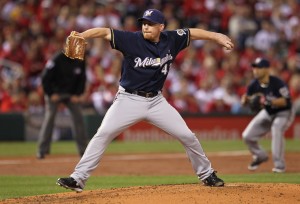 NLDS by pitching 7 solid innings in last night’s 4-2 win over the St. Louis Cardinals.  It’s the first post season victory for the 35-year-old Wolf.  It ties the series at 2-2 and it guarantees that the series now must return to Milwaukee for a game 6, regardless of the outcome of tonight’s game 5.

Wolf did serve up a pair of early solo home runs to the Cardinals, but he admitted that he never got rattled.

Francisco Rodriguez worked a the 8th and John Axford came on to earn the save in the 9th.

What a difference a day makes.  Down 2 to 1, there was a gloomy picture being painted concerning the Brewers chances.  But being tied 2-2 instead of down
3-1 is monumental.