You are here: Home / Packers / Driver returns from injury to catch TD pass 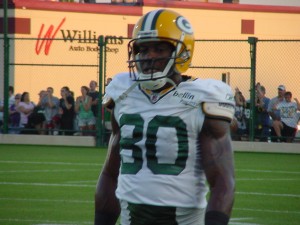 Aaron Rodgers scrambled into the end zone on a touchdown run.  From there, Driver wasn’t sure if he’d be playing again!

Driver went down hard, eventually was carted off to the lockerroom and then came back to play in the second half and catch a touchdown pass in the Packers 49-23 win over the Denver Broncos at Lambeau Field.

AUDIO: Driver on his knee injury :20

Driver was limping noticeably in the lockerroom after the game.  He may have come back and played, but he’s not sure whether there’s an injury there that might keep him out for awhile.  Driver was asked if he thought his season was over.

AUDIO: Donald Driver on whether he thought his season was over :20

Driver finished the game with 3 catches for 20 yards and the touchdown catch.