You are here: Home / Badgers / Ohio State spoils the Halloween fun for the Badgers

For the second consecutive week, the Wisconsin Badgers suffered a Big Ten loss 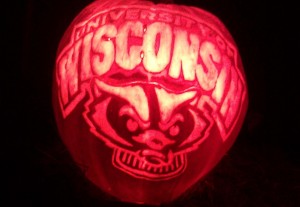 with a touchdown pass in the final minute.

Braxton Miller connected on a 40-yard touchdown pass in the final minute on Saturday night as the Ohio State Buckeyes knocked off the Badgers 33-29 in Columbus.

Bret Bielema’s Badgers just couldn’t run the ball against Ohio State’s defense.  Wisconsin finished with 89 yards  and a touchdown on the ground.  It got to the point in the second half where the Badgers just had to try to get their yards somewhere else.

Things weren’t much better for the Badgers on defense either.  They allowed the Buckeyes to put up 30 points in the second half.  But the back-breaker was the Badgers allowing a receiver to get behind the secondary for the game winning touchdown.

Now, throw in another blocked punt for the second straight week and the Badgers have back to back losses.  Special teams have been an issue with this team, and Ohio State’s final kickoff return to give the Buckeyes excellent field position was a major stumbling block for the Badgers.

The coaches will take the heat for many of the problems, but much of the blame for this loss has to fall on the players as well.  How a secondary can let a player get behind them, knowing that a touchdown beats them is unbelievable.

The Badgers aren’t out of the Big Ten title hunt, but they do need some help.  Of course, it has to start at home, with a win against Purdue on Saturday.