The Green Bay Packers were challenged on Sunday, but they held off 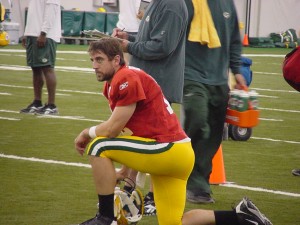 the Minnesota Vikings 33-27 at the Metrodome.  The win pushed the Packers record to a perfect 7-0 heading into the bye week.  That’s the only unblemished record still left in the NFL.

The Vikings were playing without five starters, including their two starting corners.  That made life easy on Packers quarterback Aaron Rodgers, who completed his first 13 passes.  He finished 24 of 30 for 335 yards and three touchdowns.

The Packers get some welcomed time off with the bye week here, and they need it.  The offensive line is nicked up, and defensively, the unit that made running the football most difficult, has all of a sudden had a hard time stopping the opposition.

Minnesota running back Adrian Peterson rushed for 175 yards and a touchdown.

The Vikings started a rookie (Christian Ponder) at quarterback and Charles Woodson said Minnesota did a good job of keeping Ponder in winning situations.

Woodson picked off two more passes, numbers 4 and 5 on the season and he felt he could have had more.

AUDIO: Woodson says he could have had more picks :15

Mason Crosby set the Packers franchise record when he drilled a 58 yard field goal in the third quarter, part of a 4 for 4 field goal day.  Crosby also hit from 39, 45 and 24 yards and is now 14 for 14 on the season.  Crosby has made 21 straight regular season field goals dating back to last season.  That surpasses the mark of 17-straight by Chris Jacke in 1993.

The Packers also won their 13th straight game overall.  The sets a new franchise record.  The previous record of 12 was set back in 1961-62.