You are here: Home / Health / Medicine / Public weighs in on proposed Medicaid cuts 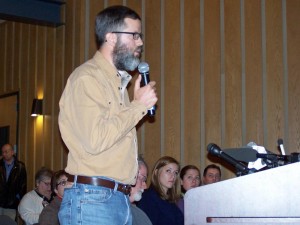 Wisconsinites are raising concerns about proposed cuts to state healthcare programs. The Department of Health Services is proposing nearly $500 million in cuts to Medicaid programs, which Secretary Dennis Smith says are needed to make sure the state’s neediest residents can continue to access care.

Smith says changes are needed to make sure the programs are sustainable for the people who rely on them most.

DHS held its first hearing on the proposal Wednesday in Madison, drawing a wide range of people speaking against the plan.

Drew Hansen, who is raising a young daughter alone after his wife died, says it will increase her BadgerCare premiums. He says that will force him to spend more time working to pay them, depriving his daughter of time with her remaining parent. He questioned how Smith could call such changes fair.

The plan would require those living above 150 percent of the federal poverty line to pay higher premiums, while maintaining most existing benefits for the largest at risk populations.

Tatiana Katara worried those kinds of premiums could price people out of care, which she relied on when problems arose during the birth of her child. Katara says BadgerCare saved her life and the life of her child because it allowed her to give birth at a hospital, which she likely would not have done without the coverage.

The agency also faced a number of speakers who argued the state has not released enough details about how the cuts will affect current enrollees, and accusations that they are trying to push the plan through quickly while people try to sort through the proposal.