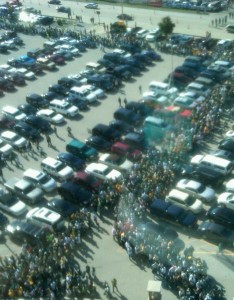 Thousands of Packer fans were still standing in long lines outside Lambeau Field and eventually missed the kickoff because of security measures implemented for the very first time Sunday. The new screening process is similar to a TSA hand-held wand inspection at an airport.

“The enhanced security measures will continue but we’ll be better at what we do,” Green Bay Police Chief Jim Arts said apologetically. “But fortunately they (fans) didn’t miss any scoring and fortunately it was a win.”

In addition to the poor planning by officials, a late arriving crowd from Milwaukee contributed to the backup. Jason Wied, VP of Administration/General Council, admits they’ve never dealt with delays this severe. He reminds fans in the future “as early as they can get there, the better it is.”

The new security protocol is a directive of the National Football League. It is response to an incident that occurred at MetLife Stadium in East Rutherford, N.J. last month, where a South Carolina man was arrested after allegedly using an illegal Taser during a fight with other fans during the Cowboys-Jets game.