You are here: Home / Brewers / Braun is Brewers MVP

The Milwaukee Chapter of the Baseball Writers Association of America made 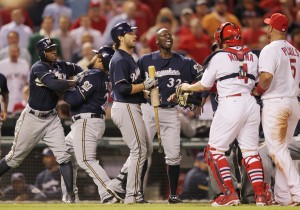 Milwaukee Brewers outfielder Ryan Braun a unanimous pick as the Brewers Most Valuable Player in 2011.

The National League MVP Award, voted on by the Baseball Writers, will be unveiled  on November 22nd.  Braun is considered one of the league candidates there too.

Brewers closer John Axford was named the Brewers’ Most Valuable Pitcher, tying for the National League lead with 46 saves.  He had a string of 43 in a row to close the regular season.

Outfielder Nyjer Morgan is the newcomer of the year.  Catcher Jonathan Lucroy is the Brewers’ Unsung Hero and Latroy Hawkins earned the Good Guy Award.