You are here: Home / Legislature / Dean of statehouse press corps dead at 67 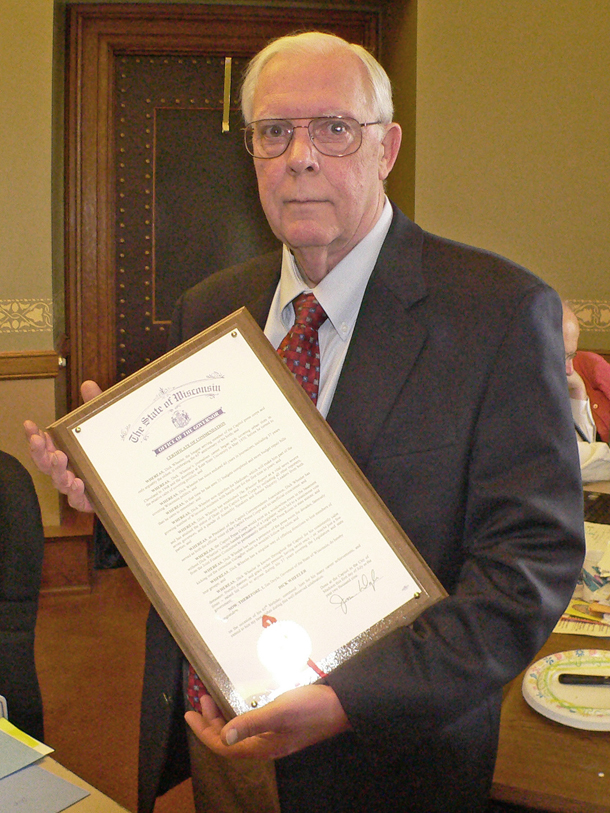 Dick Wheeler, the dean of the State Capitol press corps, died early this morning at his home in Madison. Wheeler, who operated a website covering all aspects of state government, was 67.

Wheeler’s daughter, Gwyn Guenther, says he had been diagnosed with congestive heart failure, although the cause of death remains undetermined.

Most reporters, lawmakers and their staff working in the Capitol knew Wheeler well. He had an almost limitless knowledge of state government and was frequently a source for other reporters on legislative procedure and history. Wheeler could be frequently found standing outside an entrance to the building smoking his pipe.

Wheeler first came to the state Capitol in the 1970s. Originally from Pennsylvania, he also worked as a reporter in Ohio and Michigan, where he covered major events such as the Kent State campus shootings in 1970 and race riots in Cleveland.

Wheeler first worked for a wire service, but soon created his own service known as The Wheeler Report. In its current form, the service operates as a website that provides information on legislative activity, press releases, and links to news coverage from around the state. It also sends out alerts on major events and provides in-depth analysis for subscribers.

The Wheeler Report is a family business, with his daughter, son-in-law, and longtime companion working by his side. Wheeler was often the first reporter in the Capitol pressroom each day and frequently covered late night legislative action. On Thursday, he worked a full day covering a meeting of the Joint Finance Committee.

News of his death prompted a flood of fond comments from colleagues and the politicians he covered each day.

Governor Scott Walker says Wheeler was “the undisputed dean of the capitol corps. He was a great reporter and an important chronicler of Wisconsin’s history. He always impartially and honorably pursued the truth, resulting in a body of reporting work that speaks for itself.”

State Senate Majority Leader Scott Fitzgerald (R-Juneau) says “the Capitol will never be the same without him,” calling Wheeler a “journalistic pioneer” who was always at the heart of the story and “saw angles nobody else saw.”

Assembly Republican Leader Scott Suder (R-Abbotsford) says Wheeler’s “knowledge, passion and work ethic were unmatched, and he will be missed by all in the state Capitol.”

Assembly Democratic Leader Peter Barca (D-Kenosha) says he was “deeply saddened to learn of the passing of Dick Wheeler, a true statehouse icon in Wisconsin. From his time as a reporter for United Press International to his years as the unquestioned dean of the Capitol press corps, Dick was one of the most knowledgeable, insightful, principled and hard-working journalists I have ever had the pleasure to know.”

State Supreme Court Justice Shirley Abrahamson described Wheeler as the “quintessential Capitol press room reporter. He often knew more about what was going on than his sources.”