You are here: Home / Packers / Is this the statement game for the Packers?

For the first time this season, the Green Bay Packers 45-7 win over the Minnesota Vikings was a dominant performance in all three 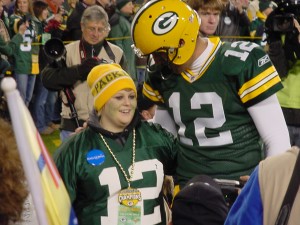 facets of the game.

The Packers improved to 9-0 by getting their usual solid contribution from the offense.  But this time, the defense and special teams came to play as well and the Packers turned in their most dominating performance of the season.

Aaron Rodgers tossed four more touchdown passes to give him 28 for the season, to go along with just 3 interceptions.  Randall Cobb returned a 1st quarter punt 80-yards for a touchdown and added a 55-yard kickoff return to give the Packers good field position on another series.  But the biggest part of this win was a defense that entered the game ranked 30th in yards allowed, yet held the NFL’s best running back, Adrian Peterson, to just 51 yards rushing.

The defense had been waiting for this kind of performance and linebacker Clay Matthews (2 sacks) was glad to finally see it happen.

A week earlier, Charles Woodson used the media to deliver a message to defensive coordinator Dom Capers.  He said Capers needed to find more ways to get their best player, Clay Matthews to the quarterback.  Capers went one better.  He found ways to get Matthews, Woodson, Tramon Williams, Morgan Burnett, Desmond Bishop and the list goes on, to the quarterback.

The Packers only registered three sacks, but they had their best quarterback pressure of the season.  They hurried rookie quarterback Christian Ponder all night long as the Packers pulled off the series sweep of the Vikings.

The defense played with a “chip” on their shoulder for the first time this season.  The Packers know they’re better than the way they’ve played in the first eight games.  Time will tell of the real packers showed up in game number nine.  Woodson said there’s no doubt that the bar has now been raised for the defense.

AUDIO: Charles Woodson said the bar is raised for the defense :16