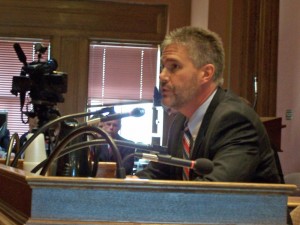 A legislative committee says Wisconsinites applying for a concealed carry permit will no longer need to go through four hours of training.

The requirement included in emergency rules written by the Department of Justice was struck down Monday by the Legislature’s Joint Committee for the Review of Administrative Rules.

Assembly Republican Leader Scott Suder (R-Abbotsford) and gun rights advocates had objected to the time restriction on training. Suder says the intent of the Legislature was to allow each permit applicant to decide on their own how much training they want to go through before carrying a concealed weapon. Suder says DOJ went beyond the intent of the Legislature when it wrote the emergency rules.

Appearing before the panel on Monday, Attorney General J.B. Van Hollen defended the time requirement. Van Hollen says the minimum was in line with what several other states have in place and, in many cases, was even on the lower end.

Van Hollen says the four hour minimum is needed so they agency has an objective way to evaluate permit applications. He argued that its removal will essentially gut enforcement of that portion of the law and brings the state closer to not even having a training requirement.

As it was written, Van Hollen says the rule clearly did not have much of an impact on who was able to apply for a license. He notes the agency received over 20,000 applications since the law took effect last week, with over 900 permits granted so far.

Based on the change, those applying for a concealed carry permit will only need to have papers signed by a certified instructor indicating they have completed some type of course. There will be no requirement to show how long the course took or where it was taken, although it must be done in person. Additional training is not required for those who have been in the military or law enforcement, or who have already taken hunter safety courses.

The Department of Justice will have to take the changes into account as it writes permanent rules for concealed carry, which will go before the Legislature for approval at a later date. The agency says it will also begin applying the changes immediately to applications already under review.