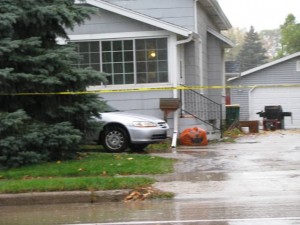 A Fond du Lac murder suspect is in custody, and family members of his alleged victim became concerned when she missed work, phone calls and hadn’t beenseen since the past Saturday. Police Captain Steve Klein says when 33-year-old Nicole Anderson missed picking up her 11-year-old daughter at school family members concern grew.

The girl was picked up by her natural father for a weekend visit and wasn’t home when the murder occurred. Nicole was shot once in the head and the suspect is her 35-year-old husband Jason E. Anderson. Klein couldn’t say whether a weapon was recovered at the scene, but Jason Anderson was considered armed and dangerous before his arrest out-of state late Wednesday morning.

Klein says the warrant for Anderson’s arrest was sent out nationwide, which helped lead to his capture. Investigators will now have the opportunity to interview him about the murder. It’s Fond du Lac’s second murder this year. The first was the shooting of Police Officer Craig Birkholz during a standoff incident last March.