You are here: Home / Packers / Packers tested, but improve to 8-0

The Green Bay Packers nearly blew a 21-point fourth quarter lead, but held on to knock off the San Diego Chargers 45-38 to improve to 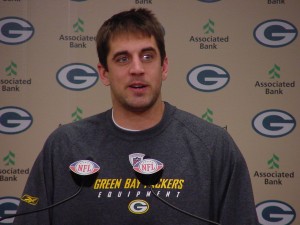 Charlie Peprah and Tramon Williams put the Packers up early by returning a pair of Phillip Rivers interceptions for touchdowns.  Rivers threw a third interception in the game as well, with the Chargers driving in the final minute trying to tie the game.  His errant pass found Charlie Peprah for a second pick and the Packers preserved the win.

Mike McCarthy’s decision to defer the choice to the second half after winning the coin flip backfired again.  The Chargers drove the ball down the field on the opening drive and took the early 7-0 lead.  When Phillip Rivers wasn’t throwing interceptions, the Chargers were chewing up yards.  Rivers passed for 385 yards and 4 touchdowns, to go along with his 3 picks.

Aaron Rodgers was 21-26 for 247 yards and 4 touchdowns, giving him 24 scoring strikes on the season.

The Packers had a chance to win going away, but some defensive breakdowns in the secondary allowed the chargers to get right back in it.

The Chargers (4-4) gave the Packers a good battle, but in the end, they suffered their 3rd straight defeat.

The Packers (8-0) end the first half of the season with a perfect record.  They’ll open the second half a week from Monday night with a rematch against the Minnesota Vikings at Lambeau Field.