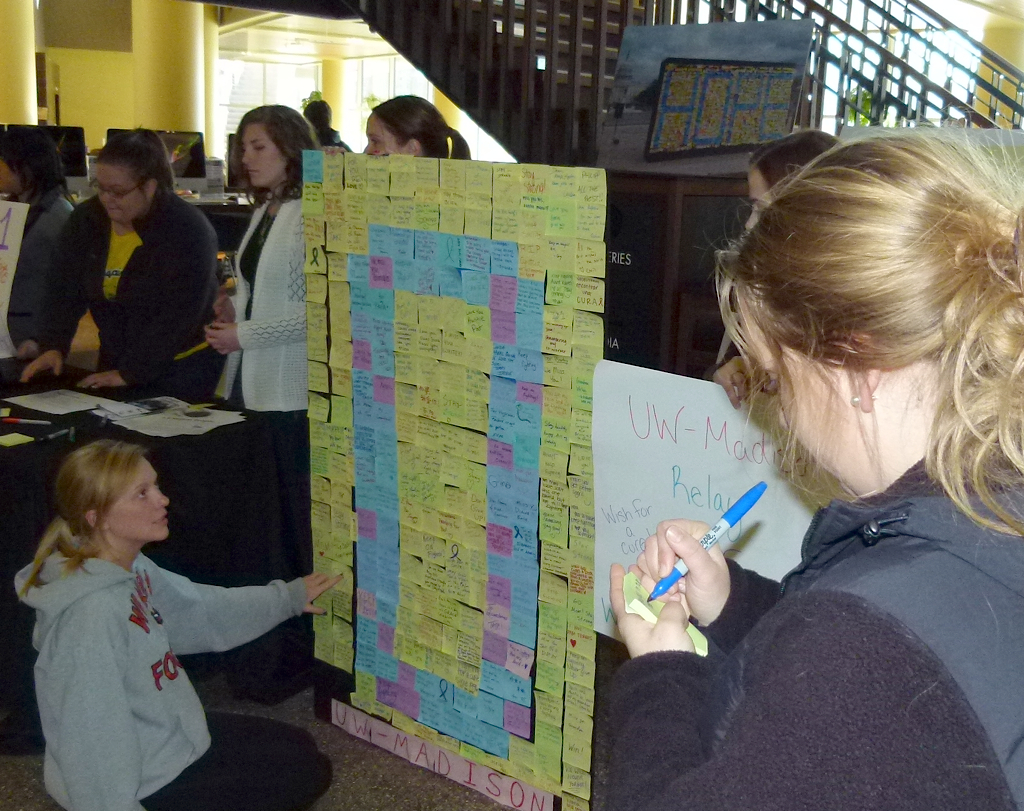 Building a wall of hope at the UW-Madison campus (PHOTO: Jackie Johnson)

Survivors and families call on Congress to make cancer a top priority.

Messages of hope are being collected on college campuses throughout Wisconsin by cancer survivors, patients, family members and volunteers. The thousands of tributes on tiny stick-it notes together will build a wall of “HOPE,” which will be delivered to lawmakers in Washington DC to put the spotlight on cancer.

Emily Rohloff is with the American Cancer Society. “Well right now the supercommittee has to find a way to cut $1.2 trillion from the budget over the next ten years and everything’s on the table and we want to remind Congress the importance of cancer research funding and to please not cut cancer research funding.

Rohloff says her group is teaming up with Colleges Against Cancer to collect the messages, put the large signs together, and raise awareness. “You can look at the numbers; more than 30,000 Wisconsinites this year will be diagnosed with cancer. But you have to look past the numbers, too, I mean, that’s your brother, that’s your mother, that’s your neighbor. We really wanna show them the people behind the numbers today. That’s kind of what we’re doing here with the series of events around the state.”

Emily Lilburn is a senior at UW-Madison. She’s part of the student organization on campus. “It’s a really great network for people who’ve been touched by cancer to get involved and personally fight back and have a coalition of others who are on with the cause.” Lilburn says everyone knows somebody who is affected by cancer. “You don’t have to have gone through it … to care.”

The wall of “HOPE” will be complete by November 23rd when the defect reduction so-called Super Committee is required to submit recommendations to Congress on how to cut $1.2 trillion from the federal budget over the next 10 years.