You are here: Home / News / Recall forces rally in Madison 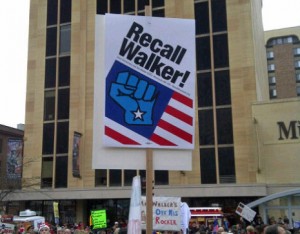 A familiar scene on the Capitol Square Saturday, as Democrats rallied to recall Governor Scott Walker. Democrats announced Saturday that they’ve cleared the 100,000 mark in gathering recall signatures, a task state Representative Brett Hulsey said needs to remain the focus for now. “First step is, we gotta get enough signatures to recall him, then we’ll decide who’s the best candidate to get Wisconsin working again,” said Hulsey. Organizers will need to collect 540,000 signatures to force the recall, and will try to get even more.

Walker has been pitching the line lately that his recall is being orchestrated by Washington-based labor unions. But Dane County Democratic activist Joe Wineke said Saturday’s rally was a Wisconsin affair. “There’s about 50,000 of my closest friends floating around here, and they’re here for a reason. As far as I know, I haven’t seen anybody who’s a union thug from Washington or New York,” Wineke said. “There’s an old political trick that when you’re guilty of something you blame the other guy,” said former state Representative Spencer Black. “Walker is getting tens of millions of dollars from the Koch brothers and other out of state corporations.”

Wisconsin AFL-CIO President Phil Neuenfeldt addressed the crowd. “Last month alone the state lost 9,700 jobs, mostly all in the private sector,” said Neuenfeldt. “This is the fourth consecutive month Wisconsin has lost jobs. Governor Walker, it is not working.” Capitol Police estimated the crowd size at between 25,000 and 30,000 people.