You are here: Home / News / Reward serves as warning against petition destruction (AUDIO) 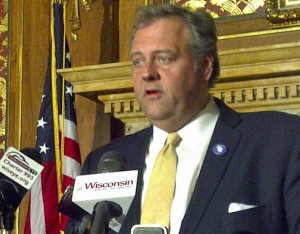 A liberal activist group is offering a reward in an effort to safeguard the effort to recall Governor Scott Walker. Scott Ross with One Wisconsin Now concedes there’s only been one report of someone tearing up a recall petition – but his group wants to make sure people know their rights as the process moves forward. “We need to make sure that people know that this is against the law, and we’re willing to invest our own money in order to make sure that the law is upheld,” Ross said during a press conference at the state Capitol on Tuesday. One Wisconsin Now will offer a reward of up to $10,000 for information leading to the arrest and conviction of anyone destroying recall petitions. “If this provides and incentive towards people being even more vigilant about protecting their rights, then so be it.”

Last week police in Madison investigated a report of a man who approached petition gatherers with the apparent intention of signing, only to tear the petition up. It had only three names on it. “We’ve seen numerous postings on FaceBook,” encouraging people to obstruct the recall process, said Ross. “I think it’s unfortunate that people are putting out there that they’re going to destroy recall petitions in violation of the law.”