You are here: Home / Packers / Rivera stunned with Sandusky charges and Paterno firing

Marco Rivera played at Penn State from 1992 through 1995.  He started three seasons and was a 4-time letter winner at the school. 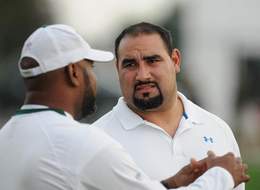 Last week, the scandal that rocked the sports world left Rivera and several other former players, trying to come to terms with the behavior of a once-revered coach, as well as officials at the school to report serious sex crimes to police.

Marco Rivera showered almost every day during every football season in the same showers that former coach Jerry Sandusky is accused of violating his victims.  To think you know a man as well as Rivera knew Sandusky and the news is unbelievable.

But Rivera said the news shook him to the point that he immediately felt the need to have a conversation with his 3 boys.

Rivera knows more officials tied to the program will likely fall and his former school will be in the news for quite some time.  But he’s also hoping the healing for the victims will come much quicker.

AUDIO: Marco Rivera on the scandal at his former school (Penn St.) 2:30