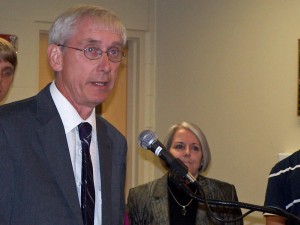 A survey of school superintendents from across Wisconsin details the effects of the state budget on education, with many top school officials saying the funding reductions and revenue caps have forced deep cuts in many classrooms.

State Superintendent of Public Instruction Tony Evers says the quality of education for many students has suffered, with seven out of ten students attending a district with fewer teachers now in the classrooms. He says the numbers show districts had a net loss of over 3,300 positions, after taking into account retirements, layoffs, and non-renewals.

Evers says those staff reductions have resulted in program cuts and crowded classrooms, with average class sizes increasing in about 40-percent of elementary schools statewide.

Governor Scott Walker’s office says the survey results show his reforms, such as requiring teachers to pay more towards their health care and benefits, are helping schools find new ways to save money. Evers says the governor’s interpretation of the survey results are based on “faulty math.”

The Superintendent says that even though 60-percent of districts have not needed to increase class sizes, it should not be acceptable that 40-percent did.

More than 350 local school superintendents responded to the survey from the Wisconsin Association of School District Administrators, out of the state’s 424 school districts.