You are here: Home / Health / Medicine / Still trouble in toyland 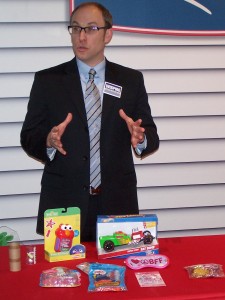 An advocacy group says parents should not buy balloons for kids under eight, as they can be a serious choking hazard if they’re popped. That was just one of the warnings for holiday shoppers put out by the Wisconsin Public Interest Research Group (WISPIRG). The group held a news conference to unveil its 26th annual danger list called “Trouble in Toyland.”

WISPIRG director Bruce Speight said 40-percent of all choking deaths are caused by balloons. From 2005-to-2009, at least 41 children choked to death on balloons, balls, or parts of toys.

WISPIRG also warned against toys with excessive phthalates, chemicals which make toys more flexible. Speight said two toys had 40-to-70 times the allowable amount of phthalates – a girl’s sleeping mask made by Claire’s, and “Funny Glasses” by a firm called Joking Around. WISPIRG’s report also said the “Elmo’s World” cell-phone is so loud that it hurt a child’s hearing – and the “Little Hands Love Book” has excessive lead.

Speight applauded recent improvements in consumer toy safety. Beginning in 2008, Congress increased oversight by beefing up funding for the Consumer Product Safety Commission. He also promoted a nationwide database for consumers to look up recalled and unsafe toys.