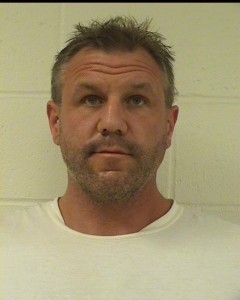 A Wausau man who crashed into a police car while texting and driving drunk was in court Monday. Prosecutors charged Chad Kopchinski with his 4th OWI after he rear-ended a State Patrol squad car at a stoplight in Wausau on Thursday. Kopchinski said he was texting and accelerated not knowing that the squad was still there. Police found empty beer cans in his car and he blew a .13 on a preliminary breath test. Assistant district attorney LaMont Jacobson says Kopchinski also had an uncased rifle and bullet inside his car along with an uncased bow and arrows. “That’s a felon in possession of a firearm,” Jacobson said during Kopchinski’s initial court appearance.

But defense attorney Dick Lawson said Kopchinski wasn’t out to harm anyone, and that there was “no suggested illegal use of the weapon, other than the fact that he couldn’t have it in the first place.” Kopchinski is in jail on a $5,000 bond pending a preliminary hearing next week. The state trooper was not injured in the accident.