You are here: Home / News / Walker recall paperwork is filed 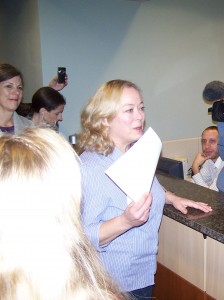 Recall organizers this morning registered with the Government Accountability Board to recall Governor Scott Walker and Lt. Governor Rebecca Kleefisch. Julie Wells was the citizen chosen by United Wisconsin to submit the paperwork. The Fort Atkinson resident has never been involved in politics but became motivated after disagreeing with the Governor’s policies.

“Walker’s taken away the rights of workers. He’s destroying our education system and he’s selling our state to the big corporations that put him in office.”

Former Dane County Executive Kathleen Falk was alongside Wells at the Recall Walker Office in downtown Madison. Falk said after traveling around the state she’s seen a number of people getting involved for the first time. “I’ve never seen anything like it in my 60 years of loving this state.”

The two along with Mahlon Mitchell, head of the state firefighters union, and supporters then marched to the nearby GAB office to file the paperwork. After dropping off the recall papers Wells said, “it feels like Christmas.”

United Wisconsin first filed electronically shortly after midnight so they could begin collecting signatures. This morning’s filing was the required signed document of their online registration.

GAB spokesman Reid Magney said organizers can turn in the 540,000 signatures necessary to force a recall election as early as January 3 but no later than January 17.

Despite the recall effort, Governor Walker said he will not take his focus off of the promise of job growth he campaigned on.

This is a corrected story of an earlier version which erroneously referred to today’s filing as a “petition.”