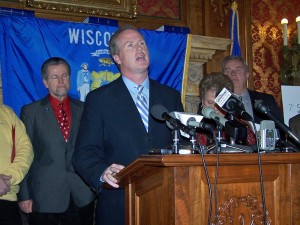 A bill from Assembly Republicans would streamline the process for approving new mining operations in Wisconsin. The proposal would set a two-year timeline for the approval of a mining permit, including a 12-month pre-application process and 360 day review period by the DNR.

The bill is largely designed to make it easier for Florida-based Gogebic Taconite to open an iron ore mine in northern Wisconsin. Fitzgerald says that project could create thousands of “generational” jobs in an area with one of the highest unemployment rates in the state.

The proposal also eliminates contested case hearings, which supporters say have been used to slow down the approval process for past mining projects. State Representative Mark Honadel (R-South Milwaukee) says lawsuits could still be filed, but only after a mining permit has been approved. Honadel says the public will still have ample opportunity to voice concerns about mining proposals during the review process.

Critics of the bill argue it will weaken environmental protection laws and limits the power of the public to fight against mining projects. State Representative Brett Hulsey (D-Madison) says it allows corporate interests to rewrite Wisconsin’s environmental laws in their favor, while officials with the Bad River Band of Lake Superior Tribe of Chippewa Indians questioned Republican claims of job creation. The Band says mining operations in other areas have created few long-term jobs, and the location of the proposed Iron County mine could actually reduce jobs in nearby tourism and sports fishing operations.

The state Senate is still in the process of developing its own mining proposal. In a statement, state Senator Neal Kedzie (R-Elkhorn), who chairs a special committee on mining, says the Assembly bill could “serve as a basis for our discussions in the Senate.”

The Assembly committee handling the bill will hold a public hearing next week in West Allis, although sponsors say they do not plan to vote on the measure until early next year.