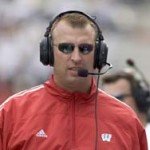 Bielema lead the Badgers to a double-digit win total for the third-consecutive year.  Wisconsin amassed an 11-2 record while securing a second-straight trip to the Rose Bowl.  Wisconsin won the Big Ten’s first-ever championship game.

Under Bielema, Wisconsin has extended its school-record bowl streak to 10 seasons, the second-longest active streak in the Big Ten and tied for the ninth-longest streak in the country.

The coach of the year award will be presented as part of the 2011 Paul “Bear” Bryant Awards ceremony in Houston on Jan. 19.