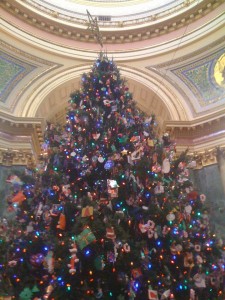 The state Capitol Christmas tree was center stage today at two ceremonies but at one them – veterans and service members were the stars. At the morning event, Governor Scott Walker said it is appropriate to honor their sacrifice of often being away from their families.

“Sometimes people ask me where our young veterans get that kind of pride and determination and I look back on our state’s history,” said Walker adding this year marks the 150th anniversary of the Civil War – which began when the Badger State was only 13 years old.

“There is something very special about the holiday season. We all have our own traditions, our own faiths but I think the common core we can agree on is family,” said Maj. Gen. Don Dunbar, Wisconsin’s National Guard Commander.

A number of Walker protestors were on hand, some brandishing signs. Some of them chose to turn their backs when he took the podium. The second tree program, held midday, focused on the tree itself, a 36-foot balsam fir from Northwest Wisconsin.