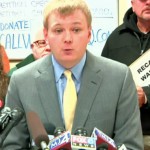 Wisconsin Democrats say they have nearly enough signatures to recall Governor Scott Walker. State party chair Mike Tate gives kudos to organizers and state residents, whom he claims have rallied around the recall Walker flag. “You have done something truly amazing. Your strength and determination has helped us collect more than 507,000 signatures to recall Scott Walker, and we are well on our way to beating our internal goal of collecting more than 720,000” says Tate.

Also Thursday, the Republican Party of Wisconsin and the Walker campaign filed suit against the GAB, over the election agency’s assertion that there is no prohibition against signing recall petitions more than once, and that it’s up to the Walker campaign to challenge instances of multiple signatures by the same person, fictitious names, or illegible entries. “If we note a duplicate signature, we can strike it,” says David Buerger, co-leader of the GAB’s recall team. “However, there is no process in our review that is specifically intended to catch duplicate signatures.”

“The GAB’s position that it is the responsibility of the Walker campaign to identify and challenge duplicate signatures flies in the face of the idea of a fair electoral process,” according to a press release from the RPW, which filed its complaint in Waukesha County Court.