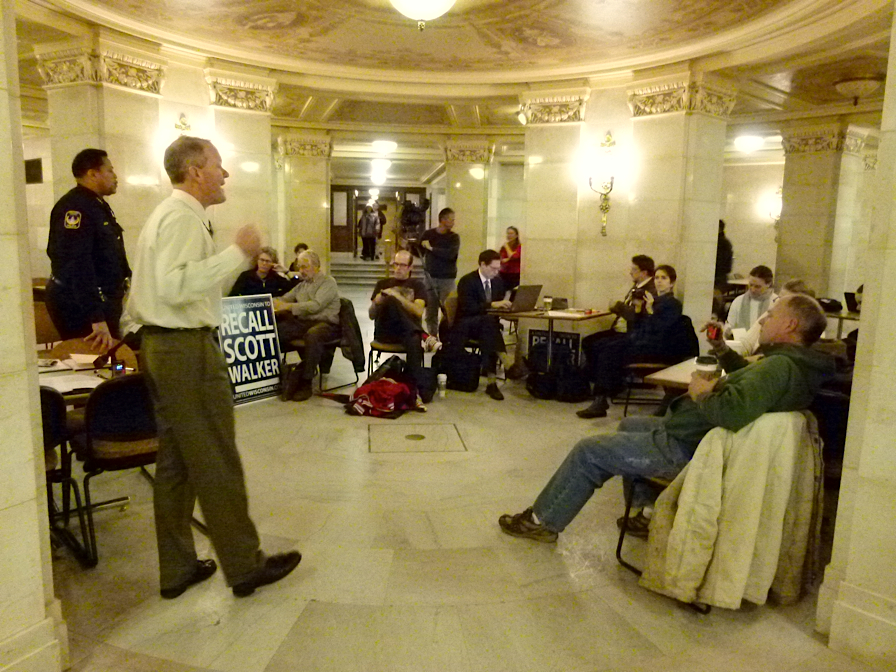 The Walker Administration is put on the hot seat regarding its new rules, which take effect December 16th. Officials defend the updated policy for public access to state facilities.

Capitol Police Chief Charles Tubbs fields questions from a couple dozen members of the public at the first of three scheduled informational meetings, including concerns about enforcement and penalties for violators — specifically the so-called Solidarity Singers, whose leader had said they have no plans to quit singing and no plans to apply for a permit to do so.

Despite repeated questions, Tubbs would not say what, if anything, would happen to violators of the new policy and more specifically, whether the regular noon-time singers in the rotunda would face arrest while singing in the Capitol without a permit. “Again, I’m not going to show that hand here today.”

The rules announced last week would bill participants for the cost of security, cleanup and repairs at state facilities. Also, groups of four or more must get a permit at least 72 hours in advance of their demonstration. Tubbs pleads with protesters to get permits to avoid problems and he’s asking for voluntary compliance.

Officials at the statehouse issue about 400 to 500 permits every year, according to an Administration official, and the few applications that get rejected are usually due to scheduling conflicts. Tubbs stresses to the group that he’s willing to work with everyone.

Assembly Democrat Chris Taylor (Madison) claims the policies were designed to address a problem that didn’t exist, and none of their questions were answered. “We are no more closer to understanding these policies than we were when we came here.”

Taylor calls the new policy yet another attempt to prevent citizens from exercising their constitutional rights of free speech. She urges officials to be better prepared for the next meeting.

Concerned residents proposed all kinds of scenarios ranging from family outings while carrying a sign to ice cream socials. They wanted to know what types of groups of four or more would be required apply for a permit three full days in advance of their Capitol visit. Tubbs refused to answer hypothetical questions.

DOA Deputy Secretary Chris Schoenherr says the policy is meant to clarify state law. After the meeting he said it was important for everyone to vent and he agrees that some clarification is needed. “Every time you go through one of these sessions you learn something. We certainly did here today and we’ll take that back to the team and discuss how we can make this productive.”

Stacy Harbough with the Wisconsin chapter of the American Civil Liberties Union (ACLU) says her group is considering legal action, saying the rules are too restrictive. Harbough says the updated policy is obviously a direct response to demonstrations critical against the current administration.