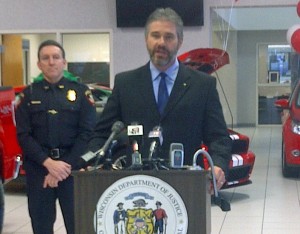 The state Department of Justice has rolled out a new crime fighting tool. For just twelve dollars a year, businesses and individuals can receive crime alert bulletins as text messages, e-mails or faxes, through the statewide Crime Alert Network . “Everybody’s in favor of it, and it doesn’t cost the taxpayers a dime,” said Attorney General J.B. Van Hollen.

The crime alert systems modeled on a similar network that’s been a success in Minnesota. Middleton Police Chief Brad Keil said his department made DOJ aware of the program there when it was used to find two children from his community after their father had illegally taken them. Lake Delton police detective Kurt Goodreau said his department has already made arrests based on alerts they sent out.

Van Hollen expects the new service to be popular with businesses, which can tailor their profiles to receive specific categories of alerts. The program should be able to pay for itself through the yearly fee.