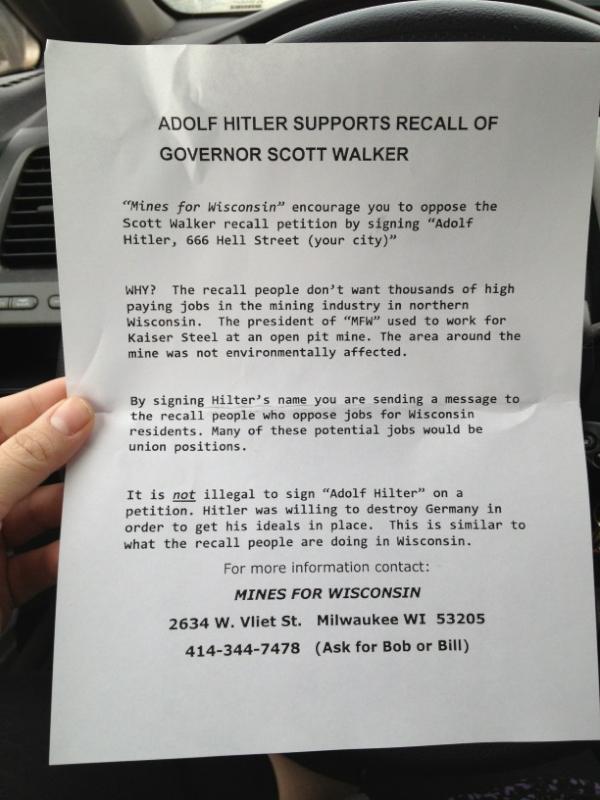 A group called Mines for Wisconsin is allegedly advising recall opponents to sign petitions with the name “Adolf Hitler.” Government Accountability Board spokesman Reid Magney reminds everyone it’s against the law to knowingly falsify a name on a recall petition and attempt to undermine the integrity of the electoral process. Anyone who falsifies a petition can face felony charges punishable by up to three and a half years in prison and up to $10,000 in fines.”

The flier being distributed reads in part, “Hitler was willing to destroy Germany in order to get his ideals in place. This is similar to what the recall people are doing in Wisconsin.” The GAB has referred this matter to the Milwaukee County District Attorney’s office for investigation. It’s also a violation of Wisconsin Statutes to deface or destroy a recall petition.

Magney says, despite popular belief, it’s not up to the GAB to take on a costly investigation of each signature … looking for duplicates and fakes. “We’re doing our job as required by law to review the petitions but the law also says that the political committees have a role to play, too.” That means the recall committee of office holder being targeted, in this case the governor, can raise unlimited funds to review and challenge signatures. “Our question is ‘Do people want the taxpayers or the politicians to pay for this?'”

The GAB will rule on any challenges to the signatures.