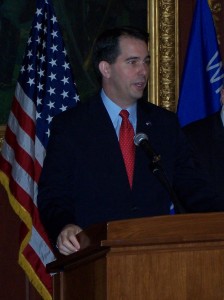 Governor Scott Walker is proposing the enrollment cap on Family Care be lifted, and the program be expanded. The cap was put in place earlier this year after a state audit found inefficiencies in the program – which provides long-term independent care to elderly and disabled.

Walker made the announcement this morning alongside a number of advocacy groups who praised his decision. Walker said his administration’s decision comes from the “unprecedented” statewide outreach by Department of Health Services Secretary Dennis Smith and Deputy Secretary Kitty Rhoades on Medicaid issues.

The Governor said under his proposal Family Care could be expanded statewide, as it currently does not exist in 14 counties, primarily in northeast Wisconsin.

The Governor said the $80 million expansion over two years comes from funding already approved by lawmakers and DHS making the program more efficient. The proposal needs legislative approval but he believes it will pass with bipartisan support.