You are here: Home / Packers / Raji voted to his 1st Pro Bowl!

B.J. Raji should have been voted to his first NFL Pro Bowl last season, but the Packers nose tackle missed out.  The former Boston 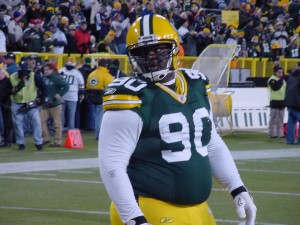 Raji’s reward comes one year, even though his numbers are a fraction of what they were a year ago.  Raji told me earlier this afternoon that he received word that he was voted to the NFC Squad.  The NFC and AFC squads will officially be unveiled by the NFL Network tonight at 6pm.

Raji this season, through 15 games, has 21 tackles and 3 sacks.  He also has a rushing touchdown as well.  But those numbers aren’t close to a year ago.  But that’s the way things go in Pro Bowl voting.  First you have to do something to get noticed and then the rewards will come.

Raji, on top of his outstanding season a year ago, intercepted a pass for a touchdown in the NFC Championship game and followed it up with a first time celebration tabbed “The Raji”.  Soon after, they were writing songs about Raji.  The “Raji”, the songs, and a Super Bowl championship gave the young defensive star his first of what could be many Pro Bowl honors.

A colleague of mine, Justin Hull from AM1570 The Score in Appleton talked with Raji earlier this afternoon about the honor.