You are here: Home / News / Tweaks made to Capitol access 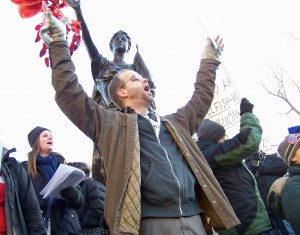 Minor alterations have been made to the Walker administration’s rules governing access to the state Capitol. Department of Administration spokesperson Jocelyn Webster says the policy, first announced earlier this month, remains substantially unchanged. “Really there are no changes,” says Webster. “In deference to the public who might be reading this policy . . . we just wanted to make it clear who the permitting process applies to.”

DOA clarifies that four or more family members or lobbyists would not be required to obtain permits before entering the Capitol. But state Representative Chris Taylor of Madison says the policy remains problematic. “There’s still a requirement that four or more people who are gathered in the public areas in the Capitol, advocating on any issue, have a permit,” says Taylor. “I do think they are improved, but I still think there’s constitutional concerns.”

Webster says DOA continues to work with the Solidarity Singers, a group which has gathered both in the rotunda and on the Capitol steps for months — and whose organizers say they have no plans to obtain permits. “As they move inside on Monday, that’s when I think the rules will first be truly tested,” says Stacy Harbaugh with the ACLU, adding that her organization will review the changes before considering any action. Solidarity Singers organizer Chris Reeder estimated Friday’s crowd at about 300 people who gathered on the Capitol’s State Street steps, singing seasonal carols rewritten to reflect recall Walker sentiments.