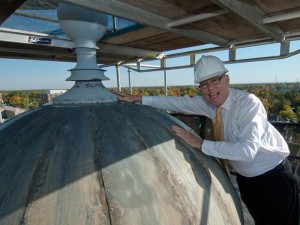 A well-known landmark on the UW-Stevens Point campus is receiving a long overdue facelift. The school is holding a topping out ceremony Saturday for its newly restored cupola, or dome, atop the Old Main building on campus.

Vice chancellor for university advancement Kathy Buenger says the 117-year-old cupola had started leaning in recent years and needed to be fixed. She says the restored structure is being viewed as “the beginning of a new era.”

Buenger says the cupola is considered a landmark on the campus and many former students have fond memories of its presence. She says people have told stories about proposing under it or memories of past restoration efforts.

The school has also hired a renowned ironworking expert to replace an old weathervane atop the cupola.

As part of the ceremony, the school will create a time capsule to mark the historical moment.