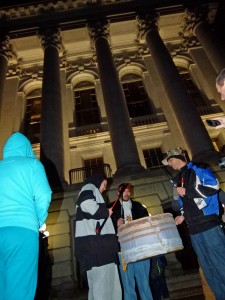 Opponents of the mining bill gather outside of the Capitol. (Photo: Jackie Johnson)

The state Assembly has approved controversial mining legislation that would streamline the approval process for a proposed iron ore mine in northern Wisconsin. The bill passed Thursday night on a party line vote of 59-36.

Assembly Speaker Jeff Fitzgerald (R-Horicon) called it the biggest jobs bill lawmakers will take up this session, with the potential to create hundreds of jobs when constructing the mine and generational jobs once a mine is opened. Supporters also argue it will create thousands of jobs across the state, primarily in Wisconsin-based businesses that manufacture mining equipment.

Democrats argue the bill strips away environmental protections and threatens water, tourism, and wetland areas. State Representative Sandy Pasch (D-Whitefish Bay) says it will help create a strip mine in a pristine area of the state, which already generates thousands of jobs tied to recreation.

State Representative Janet Bewley (D-Ashland) says the proposal ignores the needs of communities that will be impacted, favoring the interests of an out-of-state mining company over the people of Wisconsin.

Republicans countered that the bill does not guarantee Gogebic Taconite will be allowed to open a mine. Lawmakers say it just provides developers with a clearer timeline for considering the approval of the proposal.

Debate on the bill was interrupted several times by protesters, with those in the gallery shouting obscenities and even unfurling a large banner at one point. Assembly Speaker Pro Tem Bill Kramer (R-Waukesha) eventually ordered observers in the galleries removed, over the objections of Democrats.

The legislation now heads to the state Senate, where its fate remains unknown.