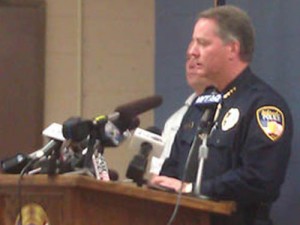 Police says the body of a man found in the Fox River Monday was the son of an assistant coach for the Green Bay Packers. Oshkosh Police Chief Scott Greuel says they have identified the man as 21-year-old Michael Philbin, son of Packers offensive coordinator Joe Philbin.

Police are working to retrace the young man’s footsteps before he disappeared Sunday morning. Philbin, a student at Ripon College, was meeting friends at the UW-Oshkosh on Saturday night. Greuel says he became separated from them at some point in the evening, with a “non-distress” call made from his cell phone at around 2:10 Sunday morning.

Police then received a 911 call at around 2:30 am Sunday from a security guard at a business along the Fox River. The caller reported hearing someone crying for help and then seeing a person’s head above the surface of the river.

Philbin was reported missing later in the day on Sunday.

Greuel says foul play is not suspected. Police are still trying to determine if alcohol was a factor and an autopsy is being conducted to determine the cause of death.