You are here: Home / News / Fitzgerald recall ready to go 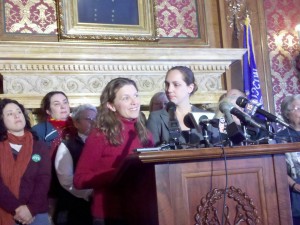 Lori Compas says they have the signatures to recall Sen. Fitzgerald (Photo: WRN)

The group working to recall Senate Republican Leader Scott Fitzgerald (R-Juneau) says enough signatures have been collected. Recall organizer Lori Compas says volunteers have surpassed than 16,742 signatures that are required to trigger a recall. The group is not releasing an official total though until the petition is turned in next Tuesday.

Compas says residents of the district have watched “Fitzgerald change from a man who won reelection on a platform on jobs and economic development, into a man who was more interested in lining up behind Governor Walker than standing up for us.”

Fitzgerald is one of four Republican Senators who are currently targeted by a recall because of their votes last year in favor of Governor Walker’s changes to the collective bargaining of public employee unions. Over the summer, six GOP Senators faced recalls. Other Senators were not eligible to be recalled until November, because they were less than a year into their current term in office.

The Senator did not return a request for a comment on the announcement, although he did file a complaint Thursday with the state Government Accountability Board that alleges the recall committee was being given an extra day to collect signatures. Compas does not believe that will impact the outcome, calling it “an attempt to silence the thousands and thousands of people” who signed petitions.

The petition against Fitzgerald, along with those against three other Senate Republicans, the governor and the lieutenant governor, are expected to be turned in Tuesday to the state Government Accountability Board.