You are here: Home / News / Governor gets boos, cheers at MLK event (SLIDESHOW) 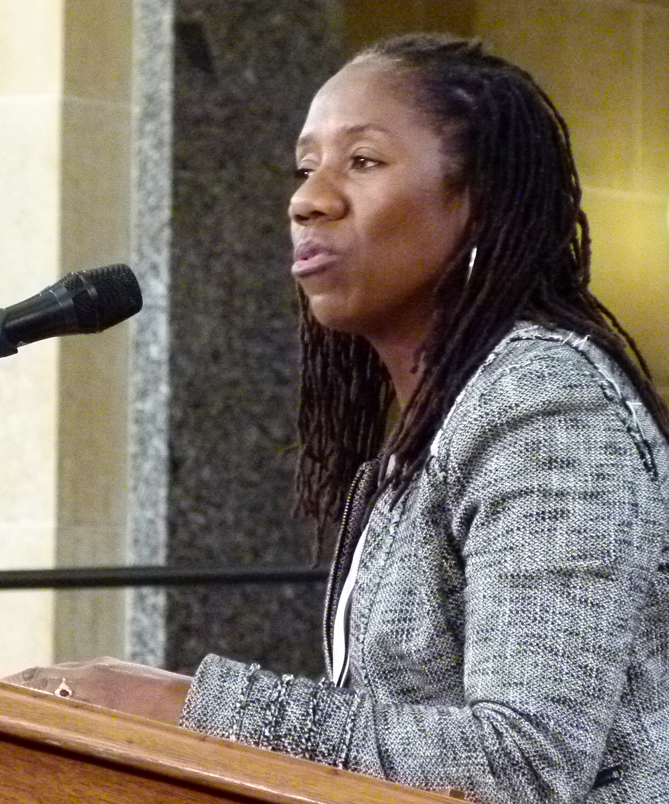 The 32nd annual event recognizing Dr. Martin Luther King, Jr. draws a big crowd in the Capitol rotunda, including some protesters who booed as Governor Scott Walker was introduced and shouted “shame” after he read the official MLK proclamation.

Professor Sherrilyn Ifill, University of Maryland School of Law, is the keynote speaker at the ceremony remembering the slain civil rights leader. “We know that Dr. King would have been on the side of workers struggling to receive a fair wage and decent working conditions.”

Loud cheers and applause come from the crowd as the professor mentions Dr. King’s commitment to labor. “We know this not because Dr. King was partisan; Dr. King famously said both political parties have betrayed the cause of justice.”

Walker faces a recall after gutting collective bargaining. While some in attendance boo the governor, many more cheer and applaud his introduction. Walker reads the official MLK proclamation, but nothing more. Governors in the past, including Walker, had traditionally given a speech or personal story relating to the workings of Dr. King.

Ifill speaks about King’s legacy and she speculates as to how he would react to today’s requirement for voter photo ID, considering King fought against the poll tax. “I can’t help but know how Dr. King would have responded to onerous requirements that require (certain groups) to have a government issued ID to vote.”

Ifill believes King would have been engaged in all of these issues if he were here today.