You are here: Home / Badgers / Jim Irwin, one of the great voices I grew up with

When I was a young boy, I loved sports.  Living in the country, cable 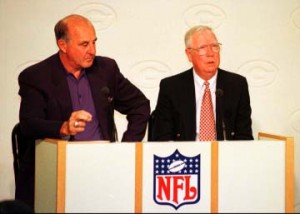 television was a luxury that my family never had.  So the radio was my best friend, my way of staying in touch with my favorite Wisconsin Sports teams.

The reason radio is my professional choice is because of the great voices like Eddie Doucette (Milwaukee Bucks), Pat Foley (Chicago Blackhawks) and Jim Irwin (Packers, Badgers & Bucks).

Irwin came to Wisconsin from Missouri and after a short stint doing television in Green Bay, his great sports destination started to take shape when he started doing play-by-play for the Green Bay Packers.

I was amazed how Jim would be in Madison calling a Badger game on a Saturday afternoon, drove to Milwaukee to call a Milwaukee Bucks game at night, then showed up the next day to call the Packers game.  Many times there were flights involved.  Three games in a 24-hour time period and he was always prepared.

Jim Irwin broadcast Packers football games for 30 years, at one time calling 612 consecutive NFL games.  That’s a lot of games without missing one.  I’m sure their were days that Irwin wasn’t playing at 100%, but he always managed to show up and keep us all informed and entertained.

Jim Irwin lost his battle with cancer this past weekend, passing away at the age of 77.  But he had a great life.  He was able to retire and move to California with his wife Gloria to be close to his family.  An avid golfer, Irwin certainly spent plenty of time on the links as well.

Many times, I went to bed with the radio on my pillow as I listened to Jim describe a Bucks basketball game to me.  I would usually fall asleep during those west coast games with the game still on.  My mother would turn the radio off and I’d get the full report on the game from my father the next morning.

I didn’t broadcast games with Jim, but I did work on the Green Bay Packers Radio network doing pre and post-game work, crossing paths with Jim before and after each game for several years.  He was always kind to me, always interested in how I was doing and willing to help in any way.

In a way, Jim Irwin was a childhood hero of mine.  I’ll always remember him, because my path to my favorite sports teams in Wisconsin came to me through Jim.