You are here: Home / Badgers / Konz to enter NFL Draft 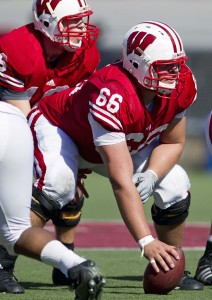 speculated for the past few weeks.  Konz announced yesterday that he is officially entering the NFL Draft.

Konz started 31 games at center for the Badgers over the last three seasons.  The Rimington Trophy finalist was named first-team All-American by the American Football Coaches’ Association and Pro Football Weekly.  He was also a first-team All-Big Ten choice by the league’s media.

Since 1999, UW has had 13 offensive linemen taken in the NFL Draft, tied for second-most in the country (only Notre Dame, with 15, has more).  Last year, three former Badgers were taken in the draft, tied with Florida for the most of any school.  Konz joins senior guard Kevin Zeitler and senior tackle Josh Oglesby as draft-eligible linemen this year.