You are here: Home / Badgers / McCabe named WCHA Rookie of the Week 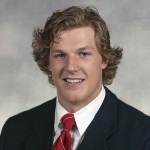 both proved to be game-winners as the Badgers skated to a 2-game non-conference sweep over RIT last weekend, has been named the Red Baron WCHA Rookie of the Week.

The Eau Claire, Wis.,  native scored both of his goals in the third period as Wisconsin recorded 6-3 and 2-1 victories over RIT on Jan. 6-7 at the Kohl Center in Madison.

The freshman defenseman now has two goals and three points in nine games played.  He skated the first five games of the season for the Badgers before missing the next 11 due to an injury.

The Badgers are on the road this weekend, at Minnesota-State for the start of a 2-game series on Friday night.