You are here: Home / Packers / McCarthy’s 15-1 team had many issues 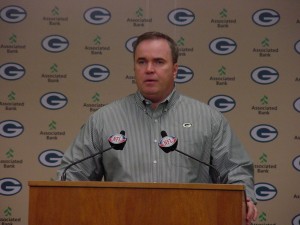 they went 15-1 in the regular season.  But when it really counted the most, the Packers couldn’t deliver in the playoffs and they bowed out with a 37-20 loss to the New York Giants in the divisional playoffs at Lambeau Field.

The dropped passes that the Packers experienced in the playoff loss were present throughout the season.  But the fumbles were uncharacteristic.

Poor tackling and big plays doomed the defense.  When asked to characterize his defense, Mike McCarthy said, “it’s not enough.”

The coaching staff didn’t turn a blind eye to the problems though.  Mike McCarthy said they addressed tackling problems repeatedly but didn’t see the results translate to the field.

AUDIO: McCarthy on the lack of improvement :16

Will this be the year that Ted Thompson finally dives into free agency to help fix the problem?  Don’t bet on it!

AUDIO: McCarthy said they’ll look to improve from within. :22

McCarthy spent at least half of his season ending press conference on the defense yesterday.  But he also discussed all of the dr0ps.

AUDIO: McCarthy on all the drops :15

Based on McCarthy’s comments yesterday, it would appear the Packers will make a strong push to re-sign center Scott Wells before the start of free agency in March.

AUDIO: McCarthy would love to have Scott Wells back :23

Jermichael Finley is also a free agent.  There’s a good chance the Packers will use a Franchise Tag on Finley, who caught 55 passes for 767 yards and 8 touchdowns during the regular season.

AUDIO: McCarthy says the sky is the limit for Finley :25

It was an outstanding regular season for the Packers, finishing 15-1.  However, it’s a little more insignificant because of the quick playoff exit.  McCarthy was asked what 15-1 means to him.