You are here: Home / News / Over one million sign to recall Walker (VIDEO)

Organizers of an effort to recall Governor Scott Walker say they have collected more than enough signatures to make it happen. On Tuesday afternoon, over one million recall petition signatures were delivered to the Government Accountability Board. Only 540,208 valid signatures are needed to trigger a recall election.

Julie Wells of Fort Atkinson, who filed the Walker recall in November, helped deliver the first box. Standing on the back of the moving truck carrying the petitions, Wells said the recall effort shows how “the people of Wisconsin came together to fight back” after “Governor Walker lied to the state.”

In a statement from his campaign, Governor Walker said he looks “forward to talking to the people of Wisconsin about my continued promises to control government spending, balance the budget, and hold the line on taxes. In my first year in office, we did just that by eliminating a $3.6 billion budget deficit without raising taxes; all while the state added thousands of new jobs. Instead of going back to the days of billion dollar budget deficits, double digit tax increases and record job loss, I expect Wisconsin voters will stand with me and keep moving Wisconsin forward.” 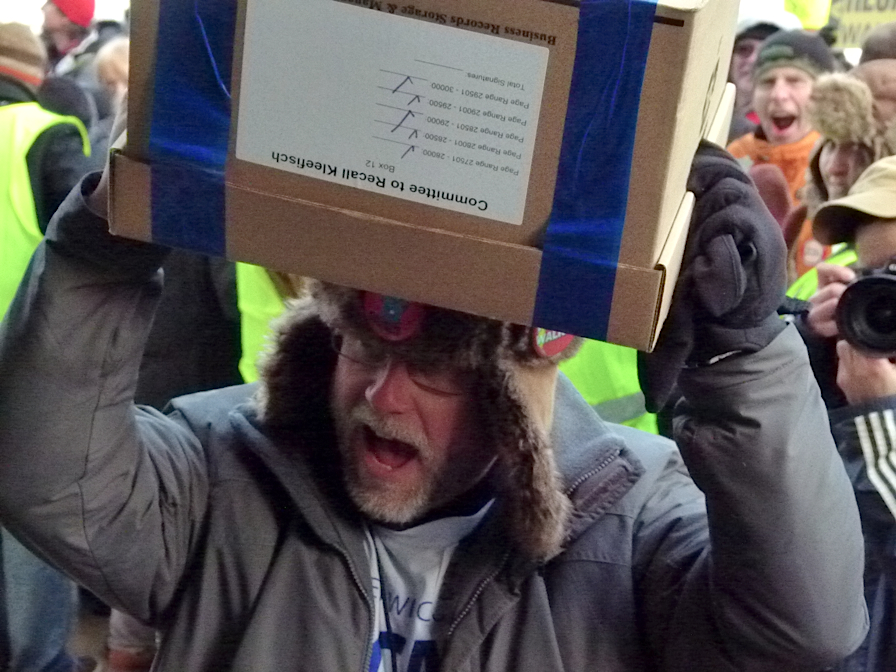 The submitted petitions will now be reviewed by the GAB, which will have to scan each page and verify the validity of signatures. Agency officials expect the process to take more than two months, putting the actual date of a recall election likely into the summer.