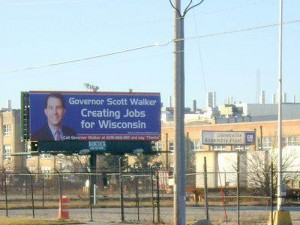 The pro-Walker billboard before it was removed. (Photo: WCLO)

A Janesville sign company may be regretting its decision on where to place a billboard touting the job creation efforts of Governor Scott Walker. The sign was briefly put up in front of the shuttered General Motors plant in Janesville this week, but was taken down quickly after groups started pointing out the unfortunate placement.

The GM plant closed in 2009, resulting in thousands of lost jobs in the Janesville area. The plant was shut down before Walker was elected governor.

The “Governor Scott Walker – Creating Jobs for Wisconsin” billboard was put up as part of a pro-Walker ad campaign being run by Wisconsin Manufacturers and Commerce. The group paid for a series of signs in Rock County, but was not involved in their placement.

The billboard company that owns the space selected the location. An official with the company confirmed the sign was removed less than 24 hours after pictures started circulating on social networking websites.