You are here: Home / News / Protesters at State of the State 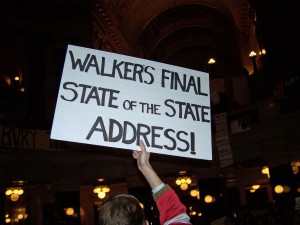 A protester holds up a sign in the Capitol rotunda. (PHOTO: Andrew Beckett)

Chants of “Recall Walker” again filled the Capitol rotunda Wednesday night as the governor delivered his State of the State address.

The demonstrations started with many of the pro-labor and anti-Walker songs that are featured each day in the “Solidarity Sing-a-long,” the noon time gathering that takes place in and around the Capitol each day. Chris Reeder, who organizes the daily events, says their voices have filled the building each weekday for months, and they felt the State of the State was another great opportunity to be heard.

Capitol Police estimate about 200 protesters were inside the building during the speech.

The singing quickly stopped when Walker started his address. Protesters gathered outside the Assembly chamber, filling the building with deafening chants. However, their voices were merely background noise inside the Assembly, with Walker never acknowledging them or the recall effort against him.

A handful of protesters were able to make it inside the gallery though, and attempted disruption at several points during the governor’s speech. One woman was quickly removed by Capitol Police after shouting “liar” and “recall Walker.”

The disruptions drew criticism from Republicans. State Representative Robin Vos (R-Rochester) said it was a shame a “very small number of nut jobs” were in the audience disrupting what the people want to hear.

State officials say four people were arrested Wednesday night in or around the Assembly chamber for disorderly conduct.