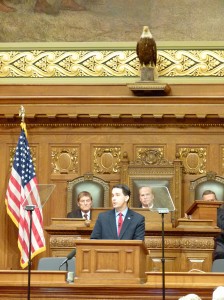 Wisconsin Governor Scott Walker kept his cool and stayed on message despite a torrent of strident heckling during his second State of the State address before a joint session of the legislature in Madison Wednesday night.

Walker says he’s leading th e state in the right direction in terms of economic growth. “When I ran for governor, I talked a great deal about the core principles I call ‘Brown Bag Common Sense.’ One of those principles is that people create jobs, not the government,” he says. “Tonight I’m happy to report that after three years of losing 150,000 jobs Wisconsin actually added thousands of new jobs in 2011. New business formations are up by over 2 percent. And our unemployment rate is down from a year ago. In fact, Wisconsin’s unemployment rate is not only lower than the national average but much better than our neighbors to the south in Illinois.” The comparison with Wisconsin’s neighbor to the south drew thunderous applause.

Walker highlights a couple of happy property taxpayers: Pam Petri of Rice Lake saw her property tax bill go down by more than $100, and Gayle Griswold of West Salem, who also saw her property taxes decrease. Unfortunately for Walker, neither woman was in the Assembly gallery, but numerous vocal opponents of Walker were. “Because I respect the hardworking people of Wisconsin, I will continue to be a good steward of the taxpayers’ dollar,” he says, followed by a scream of “liar! Recall Walker!” from a woman in gallery.

As Walker spoke about “the simple concept of respect” for fellow citizens, he had to raise his voice over another heckler. Walker was heckled at least five times by people in the gallery. Some were drowned out by applause from lawmakers. All were escorted out by law enforcement.

Walker says employment – especially for veterans – is a key goal for him. “It is unacceptable to think that any many or woman who has served our country would return home and not be able to find a job, I’ve made full employment of our returning veterans a number one priority of the state Department of Veterans Affairs,” he says. And later, Walker asked small business to pitch in on job growth. “Tonight I’m asking small business owners from across the state to consider hiring at least one more person this year. Imagine how many more people we could get working if we all pitched in together.”

Walker was again heckled as he spoke about working with state Superintendent of Public Instruction Tony Evers on the Read to Lead Task Force. “Wisconsin used to lead the nation as one of the top-ranked states in 4th grade reading assessment. But by the time I took office Wisconsin had sunk to the middle of the pack. We can all agree that we can and should do better,” he says. Walker also says he served as a reading mentor for a third grader in Milwaukee last week.

Walker also returns to a familiar touchstone in his State of the State address, one he has mentioned on a number previous occasions. “One of the most important parts of our state Constitution affirms that frugality in government leads to freedom and prosperity for our people.”