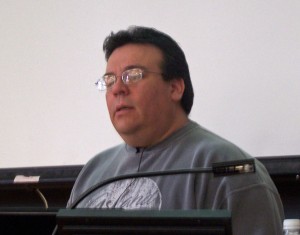 As the Wisconsin legislature rushes to complete mining legislation, a tribal leader remains opposed to any iron ore mine in the tribe’s ceded territory in northern Wisconsin. Gogebic Taconite wants to apply for permits to operate an open-pit mine in the Penokee Range, just six miles south of the Bad River Band of Lake Superior Chippewa Reservation. The area is laced by rivers and streams which flow into the environmentally sensitive Bad River Watershed.

“Lake Superior Chippewa are radical environmentalists,” says Bad River Tribal Chairman Michael Wiggins, Jr. “I get asked about our opposition to the mine, and I want to say I’m opposed to it on the fact that it’s scarification of mother Earth.” The proposed iron ore mine is the subject of intense maneuvering in the legislature, with limited time remaining to pass a bill in the current session. An Assembly bill, largely written at the behest of Gogebic, passed on a partisan vote in January. That measure has run into opposition in the state Senate, where Republicans hold a narrow one vote majority.

Senator Dale Schultz of Richland Center opposes the Assembly bill, and has proposed an alternative along with Democrat Senator Bob Jauch of Poplar. “It’s tough to support any type of legislative initiatives that ultimately hope to bring this mine to fruition, given our vehement opposition in Bad River,” says Wiggins. “But I can appreciate the fact that Senator Schultz and Senator Jauch are trying to throw some semblance of process into all this, because it hasn’t been shown by the Assembly or the Senate.” Wiggins says Schultz is “under a tremendous amount of pressure from corporate interests.”

While the proposed mine is within the ceded territories, areas of northern Wisconsin in which the Lake Superior Chippewa are allowed to hunt and fish under the provisions of 19th century treaties with the federal government, Wiggins isn’t sure the tribe will be able to exercise those treaty rights in order to block the mine. “That remains to be seen,” he says. “If given the time to completely immerse themselves in what their ink and their legalese means for the people of Wisconsin and the Bad River tribe, these legislators would have trouble sleeping at night. They would have trouble, just like I’m having trouble, and they would slow this whole process down.”