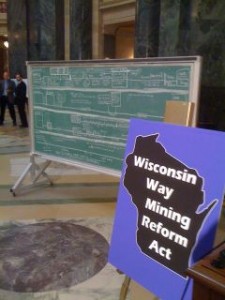 Senate Democrat Bob Jauch, the bill’s co-author, said they’ve addressed concerns the Assembly bill timeline, of 360 days, is too short to assess environmental impacts of a proposed mine. Jauch said their measure has a 270-day timeline for such a study but the proposal includes “off ramps” in which the DNR and applicant can mutually agree to pause the timeline. The legislation allows for an unlimited amount of these “off ramps.”

Once an environmental impact study is complete, the DNR has an additional 270-days to approve-or-deny a permit.

The proposal also has the applicant paying for the permit process, with a cap to exceed no more than $2 million.

The Assembly approved mining bill was largely written by input from Gogebic Taconite, a company wishing to build an iron ore mine in Northern Wisconsin. Although Jauch represents the region of the proposed mine, he warned of drafting any legislation for a single company, or project, as future metal mining may be located other parts of the state.

Recognizing his fellow Republicans are wary of new taxation, co-author Dale Schultz stated, “No new taxes over the lifetime of the mine are proposed.”

The plan would require $5 million a year (for the first five years) with 100% of the dollars going to the nearby area for economic development, transportation, infrastructure and a fund designated for catastrophic incidents.

The bill may face an uphill battle. Shortly after this morning’s news conference, Republican leadership in the Assembly criticized the proposal in a joint statement. “On its face, the Schultz-Jauch proposal is based largely on a substitute amendment that was already rejected by the Assembly because it ensures that no company will ever do business here,” said Speaker Jeff Fitzgerald, Majority Leader Scott Suder and Joint Finance Committee Co-chairman Robin Vos.

An earlier, moderate bill written by GOP Senator Neal Kedzie was rejected by Senate Majority Leader Scott Fitzgerald, earlier this month, in favor of the Assembly version. Fitzgerald also disbanded the Senate’s special mining panel; it included Kedzie as chairman and Jauch and Schultz as members.

Schultz earlier indicated changes will probably be made. “Our drafted stuff is going to be picked apart by the Joint Finance Committee and we certainly look forward to putting something that all of us can embrace.”

The authors are still finalizing the bill but say their measure is a much simpler 12-page draft compared to the 183-page Assembly legislation.