You are here: Home / News / Birkebeiner good to go 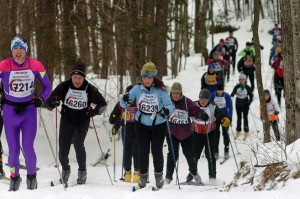 The 39th annual American Birkebeiner, North America’s largest cross-country ski race is Saturday. Media Coordinator Susan Kendrick says conditions on the Birkie Trail between Hayward and Cable ought to be excellent. “I know it’s hard to believe for people coming from farther away, but once they’re here they’ll see the snow and be glad they came,” she says. Unlike much of the rest of the state, Kendrick says the Hayward area has had timely snowfall dating back to December. The weather also looks to be ideal for some 9,500 participants in the Birkie and related events. With a projected high temperature of 25 degrees, Kendrick says skiers can expect “a perfect blue wax type of day.”

Saturday will be special for John Kotar and Ernie St. Germaine — they’re the only remaining founders who’ve skied every Birkie since 1973. A third founder, Dave Landgraf, was killed in a bicycle accident last August. Landgraf was honored at Friday night’s opening ceremony, and a scholarship fund has been established in his name.