You are here: Home / Sports / Gamblers McKay is among franchise greats 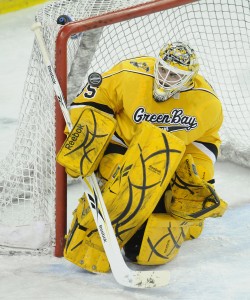 most regular season wins as a Gambler goaltender, earning his 54th regular season victory on Tuesday, 4-0 over the Waterloo Blackhawks.  McKay surpassed Jure Penko, who held the previous mark of 53.

McKay clinched the shutout victory by saving all 25 Waterloo shots.  He improved his record to 15-3-2 on the season.

The Gamblers (30-7-2) host Chicago on Saturday night at the Resch Center in Green Bay.