You are here: Home / Sports / Giants followed the path of the Packers to win Super Bowl

A year ago, the Green Bay Packers needed help to get into the post season.  Not only did they get that help, but the Packers 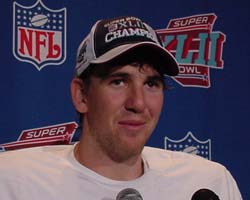 played their best football in the playoffs and went on to beat Pittsburgh to win the Super Bowl.

One year later, the New York Giants sat at 7-7, hardly with a pulse, the Giants put it together down the stretch and went on to win Super Bowl XLVI 21-17 over the New England Patriots.

The Giants finished the regular season with a 9-7 record, hardly the record one would associate with a Super Bowl Champion.  But for the second straight year, the NFL title didn’t go to the team with the best record or home field advantage, it went to the team playing the best football when it counted.

Mike McCarthy said before this season started and repeated it several times that the preferred path to the Super Bowl was by winning the division and securing home field advantage throughout the playoffs.  There’s nobody that was arguing that point either.  But the winner in 5 of the last 7 Super Bowls didn’t have a first round bye, including the New York Giants this year.

New England did earn the top seed in the AFC, but the Patriots (15-4) finished one-game short of the championship.

Eli Manning won his second Super Bowl MVP award and may have cemented his spot in the Hall of Fame when he retires.  He now has one more Super Bowl win than big brother Peyton and they might not be his last either.  Six times, Eli Manning brought his team from behind this year to win.  He set an NFL record with 15 fourth quarter touchdown passes.

Elite?  He certainly belongs in that class.  But you can’t argue his ability to win big games after he added to that number against the Patriots.