You are here: Home / Badgers / Kohl Center Ice Sheet to be named for Badger Bob 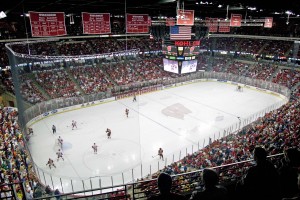 being named for one of the school’s legendary coaches.

The Kohl Center ice will be named “Bob Johnson Rink” in recognition of the men’s hockey coach who guided the Badgers to three NCAA titles during a career that also included coaching stints in the Olympics, World Championships and the National Hockey League.

During his fifteen years at the helm of the Badger program, Johnson coached Wisconsin to seven NCAA tournaments, winning three championships in 1973, 1977 and 1981.  He coached numerous individual players to conference and national awards.  He also led the United States at the 1976 Olympics, three Canada Cups and four IIHF Men’s World Championships.

Johnson went on to coach the NHL’s Calgary Flames for five seasons (1982-87) and led the Pittsburgh Penguins to the Stanley Cup title in 1991 before passing away from brain cancer that fall.